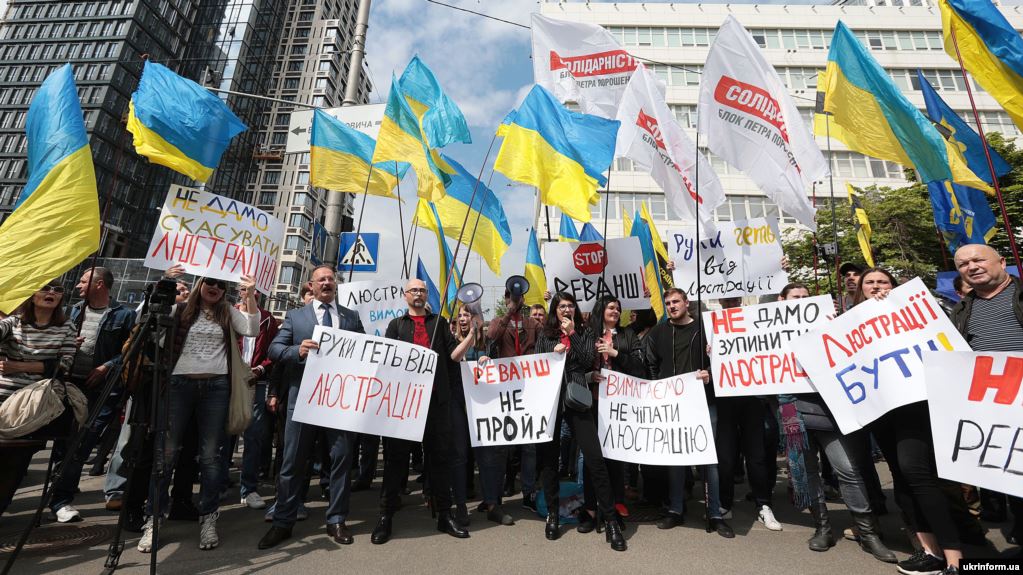 The European Court of Human Rights has found that Ukraine violated the rights of five Ukrainians who were dismissed from their posts as a result of Ukraine’s Government Cleansing (Lustration) Law.  The judgement from 17 October 2019 is a fairly damning assessment of aspects of Ukraine’s lustration law, though not unexpected since most of the failings of the law were pointed out back in 20144, but ignored.  Volodymyr Yavorskyy, human rights activist and one of the fiercest critics of the law, believes that parliament must now amend the law, and that those dismissed should now be able to get their jobs back.

The issue, it should be stressed, is not lustration per se, but how and on what grounds it is applied.  It is widely recognized that in countries emerging from dictatorship or authoritarianism, measures of transitional justice, including lustration, may be needed in order to effect real change.  The idea essentially is that people seriously compromised by their role in a dictatorship, or similar, should be prevented from holding certain important posts.  It is for this very reason that the failure to come up with an adequate law back in October 2014 is so frustrating.

The law that was passed in October 2014 proposes the dismissal of individuals if they occupied specific positions in the civil service from 25 February 2010 to 22 February 2014 (during the regime of former President Viktor Yanukovych), or in the Communist Party of the Ukrainian SSR up to 1991, or if they had failed to file lustration statements.  The law stipulates that the names of individuals subjected to lustration are published in the Lustration Register, an online resource maintained by the Justice Ministry and on public access.

In the Case of Polyakh and others v. Ukraine, the Court in Strasbourg combined the applications of five people who asserted that their rights had been infringed by the lustration law.  Four had, during the Yanukovych period, held posts which fall under the lustration law, while the fifth had been a secretary of a Communist Party division. All asserted that the measures taken against them under the Lustration Law had violated Article 8 of the Convention (the right to privacy and family life), since their names, merely by virtue of their former position, had been added to the Lustration Register.

Three of the applicants also complained that their right to a fair trial under Article 6 of the Convention had been infringed by the domestic courts’ prolonged failure to examine their complaints over their dismissal.

The Court also noted that there have been several submissions to the Constitutional Court over the Lustration Law.  These have been combined into one case which is still being considered.  With reference to the submission from 47 MPs, ECHR notes that “The gist of their argument was that the Act essentially held the official subject to it liable for certain actions which were not illegal when they were committed, on the basis of a collective rather than individual assessment of their guilt, without due process.”

These arguments are pertinent to the cases considered by ECHR, especially the last point, namely that the applicants had been penalized because of a blanket ban, rather than because of their individual actions.

The Court referred to various documents, including the Resolution of the Parliamentary Assembly of the Council of Europe on measures to dismantle the heritage of former communist totalitarian systems and a Council of Europe Venice Commission opinion regarding the given Lustration Law.

It found that there had been violations of Articles 6 and Article 8, and was especially critical of the application of the law to a person who had, decades ago, been secretary of a Communist Party unit.

“In the present case the lustration measures were enacted and applied more than twenty-three years after Ukraine’s transition from totalitarian Communist rule to democracy. What is more, they were not targeted at an alleged KGB agent but a former official in the Communist Party of the Ukrainian SSR in the absence of any indication that his activities in that party were associated with any human rights abuses or specific anti-democratic activities…. (320)  The Court finds that the Ukrainian authorities have failed to give cogent reasons to justify lustration with regard to persons who merely occupied certain positions in the Communist Party prior to 1991” (321) … “No serious argument has been made that the applicant, a local official working in agriculture, could conceivably pose a threat to the newly established democratic regime. The domestic authorities demonstrated total disregard for his rights.”

In concluding that there had been violation of Article 8 in all cases, the Court stated that “it has not been shown that the interference in respect of any of the applicants was necessary in a democratic society.” (323)

The Helsinki Human Rights Union reacted to the 17 October judgement by calling on Ukraine’s Constitutional Court to consider the constitutionality of the Lustration Law as soon as possible.  UHHRU also pointed out that it had given a very critical assessment of the law back in 2016.

Other earlier criticism of the law included the fact that it did not establish a single independent lustration body. Here too, of course, this is linked with the fundamental problem of the Ukrainian law, namely that independent assessment of individual cases was simply not required.  In principle, you need only establish what a person’s job was at the relevant time, not whether they did anything that made their ongoing employment a danger for democratic progress.

Another warning which, unfortunately, proved to be warranted was over the scope of the law, with so many posts mentioned that, had it been applied fully, it could have led to paralysis of many institutions.  That, in turn, meant that there was a real danger that the law would be applied selectively.  This does appear to have been the case.

Almost 100 officials had been removed in the first year and a half after the Lustration Law was passed.  Whether the law is now found unconstitutional or not, it looks as though many, if not all, such dismissals and other measures applied within the context of the Lustration Law may now be in question.