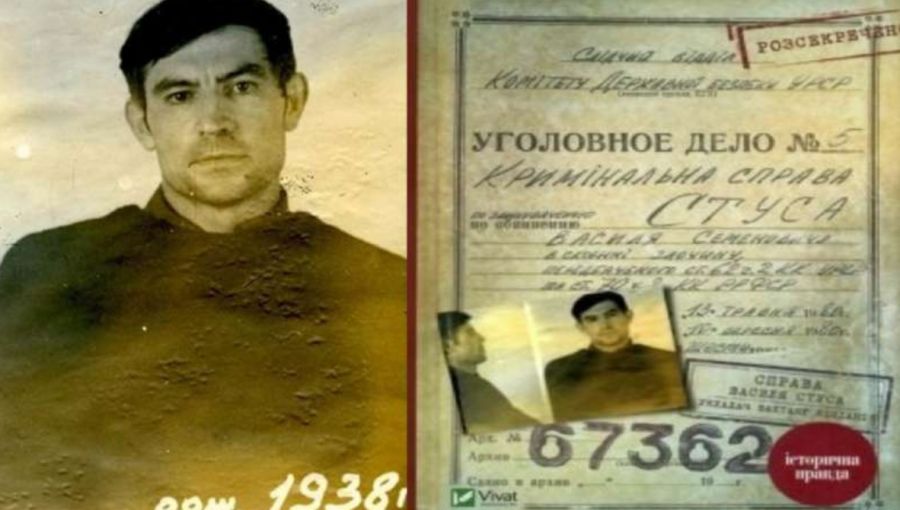 Controversial Ukrainian politician Viktor Medvedchuk cannot erase his shameful role, as a Soviet state-appointed lawyer, in the political trial of the great Ukrainian poet Vasyl Stus, but he is trying to silence those who write about the part he played.  The startling ruling by the Darnytsky District Court in Kyiv on 19 October, prohibiting circulation of the book ‘Vasyl Stus Case’ by Vakhtang Kipiani, probably demonstrated Medvedchuk’s considerable influence in Ukraine, but only increased interest in the latter’s treatment of Stus, with all copies of the books sold out within an hour and a further 3,500 print run announced. The lawyer representing Kipiani is also fairly confident that the ban will be overturned at appeal stage, and will therefore never come into effect.

Stus was imprisoned by the Soviet regime twice for what was termed ‘anti-Soviet agitation and propaganda’.  After the second arrest in 1980, Stus tried to refuse the services of a state-appointed lawyer, but Medvedchuk was foisted upon him.  The latter did not attempt to deny the absurd charges, instead asking only that the court considered mitigating circumstances.  Stus died, aged just 47, during the night from 3-4 September 1985 in the notorious Perm-36 labour camp in Siberia.

Kipiani’s book ‘The Vasyl Stus Case’ was first published by the publishing company Vivat in May 2019. Medvedchuk filed a civil suit demanding that nine phrases were removed as false and defamatory, with this partially allowed on 19 October by Judge Marina Zastavenko from the Darnytsky District Court.

The court ruled that three of the phrases from the chapter ‘Did lawyer Medvedchuk kill the poet Stus?’ are false and defamatory, namely:

“whether Stus had the chance to choose “the lesser evil”.  It is a fact, however, that the lawyer, provided and supported by the State Security Service was called Viktor Medvedchuk”  (p. 661)

“Medvedchuk in court acknowledged that all ‘crimes’, supposedly committed by his client, “deserve to be punished” (p. 664)

“He [referring to Medvedchuk] effectively supported the prosecution.  What do you need a prosecutor for, when there are such ever-obliging lawyers?...”

The court further ruled that another three phrases could not be published without Medvedchuk’s agreement.  Each of these phrases paints a very unfavourable picture of Medvedchuk (saying that he ‘crucified the poet’, asking whether he had been afraid of the KGB, or was merely a cynical and immoral individual, etc).  Judge Zastavenko appears to have accepted the respondent’s position that these were clear value judgements and did not, therefore, call them ‘defamatory’.  She instead ruled that the phrases violated Medvedchuk’s personal and non-property right to the use of his name only with his consent,  and that they made it possible to identify him as a figure in the work.

The judge rejected Medvedchuk’s claim with respect to the three other phrases, including one that called him the “son of a polizei [the ‘auxiliary police’ working for the Nazis in WWII]”

The court also banned circulation of the book, while the ‘offending’ phrases are still there, and the use of information in the press; radio; television; on the Internet or other media from the chapters about Criminal Case No. 6 and ‘Did lawyer Medvedchuk kill the poet Stus?’ which make it possible to identify Medvedchuk without the latter’s permission.

A ban on any book, let alone one about a great Ukrainian poet who died in the political labour camp he was sent to after Medvedchuk acted as his lawyer, is certainly shocking. It  is, however, worth considering the comments made after the hearing by Viacheslav Yakubenko, the lawyer who represented Kipiani in this case at the Kharkiv Human Rights Protection Group’s request.  In a brief post entitled “Don’t throw your slippers at the judge!”, Yakubenko explains that Medvedchuk had demanded that the publication and sale of 9 phrases in the book ‘The Vasyl Stus case’ be banned “on any territory” and in any form.  Since the phrases cannot be excluded from a book which has already gone to print, this effectively meant the banning of the entire book.

Yakubenko reminds his reader that the European Court of Human Rights considers bans on books to be an extremely serious restriction of freedom of speech permitted only where this is needed to defend the rights and interests of others. The point in this case, he says, is that there was nothing in the nine phrases that Medvedchuk objected to which had not been known about Medvedchuk before.

Yet Judge Zastavenko partially allowed Medvedchuk’s suit, finding three phrases untruthful. She also prohibited Medvedchuk being mentioned as a person with a role in the book without his assent.

The book is about the ‘case’ brought by the Soviet regime against the poet and human rights defender, and Medvedchuk’s role in that case and trial cannot be denied. This makes the prohibition evidently absurd.

Here, however, is where the story may not be quite as hopeless as was initially assumed. Yakubenko writes that he experienced the same initial shock as everybody else, pointing out that this is the first time in 15 years of practising as a lawyer that “in defamation cases, the court defended the claimant more than the latter asked”.

Having read the ruling, Yakubenko asserts that “the judge did what she could”.  The reason, it should be said, is fairly depressing. Medvedchuk, the leader of the Opposition Platform – For Life party is most known now for his pro-Russian position and his friendship with Russian President Vladimir Putin, as well as for his effective control of several influential media in Ukraine.  As Yakubenko notes, “history does not know of cases where first instance courts have refused to allow Medvedchuk’s numerous defamation suits.”

He believes that Judge Zastavenko went further and, by doing so, by going beyond what Medvedchuk had demanded, she has guaranteed that the ruling will be revoked at appeal stage.

This is certainly to be hoped, however the idea that a ruling needs to be so shocking in order to ensure that Medvedchuk cannot block the unseemly truth from being published remains profoundly worrying.