Astounding AppointmentOfficials to get their cut from contentious “biometric” lawWhat now?Implausible ImitationCosmetic “veto” to seriously dangerous lawMore than enough grounds for a vetoUkraine’s Internet Association calls for veto of “biometric” lawHuge passport scam with 45 million victimsUncontrolled snooping versus “universally accepted European practice”More questions about passports, biometric details and Hrytsak’s plansVeto Law on Single State Demographic Register!Whose Access to Information?«Here I stand before you, as if naked…»All-out biometricOngoing passport warsLaw on Biometric Passports vetoed. What next?Initial support in Verkhovna Rada for biometric passportsMoving closer to biometric passports?All Personal Data you provide may be taken and used against youUkraine alone in allowing Internet domain owners to remain anonymous
• Personal data protection

Resounding No to Life under X-ray 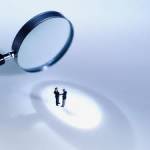 Civic activists have organized a press conference / discussion for Wednesday entitled “Life under X-Ray: How to prevent the Unified State Demographic Register.  The event on Oct. 9* will include representatives of the Centre for Legal and Political Reform, the Centre for Civil Liberties and other NGOs and be moderated by well-known journalist Natalya Sokolenko.  They will be considering one of the most dangerous laws passed over the last three years and there has been stiff competition.

In November 2012, after a somewhat unconvincing imitation of a presidential veto, President Yanukovych signed into force the Law on a Unified State Demographic Register adopted by parliament on Oct. 2.   In so doing he yet again ignored warnings from a large number of NGOs who had provided cogent arguments against the law.

The law was presented as being in compliance with EU requirements for visa liberalization.  It was nothing of the kind since the EU stipulated only the need for passports to be biometric and the law passed envisages biometric chips for some 18 documents.  The demand for so many biometric documents is set to be a huge financial burden for ordinary Ukrainians and a source of profit for those producing the biometric chips, and for officials.

The other reason for the gravest concern pertains to the planned register which will contain effectively any and all information held by the authorities about an individual.

The suggestion that the law meets EU standards is preposterous since a unified register is proposed without any indication of either the purpose for storing the information or of how it will be protected.

What is envisaged is a database which will contain all types of information about a person from totally different departments and state bodies.  The term “Under X-Ray” is thus highly appropriate.

No mechanisms are envisaged for protecting sensitive personal data which is likely to end up for sale on the black market.

A taste of what could await Ukrainians was provided in the first days of October when most vital state registers were blocked.  While there are conflicting versions as to who are the goodies and baddies in this particular conflict, some worrying details came to light.  It would seem that two software companies prepared the necessary programmes for the state registers run by the Justice Ministry’s Information Centre (Derzhinformjust).  Although the programmes were created with state funding, the companies sold “rights”, and have since been receiving massive amounts in “royalties” for use of the registers.  The amount of money changing hands was enormous.  While there is dispute about the motives which impelled the Justice Minister and newly appointed head of Derzhinformjust to initiate changes, most analysts suggest that the registers were brought down by the two software companies feeling their profits to be at risk.  If this is how government bodies and companies linked to them fight for best place at the trough, then the threat to individuals from the proposed ndiscriminate and unprotected date collection could make all warnings seem like feeble understatements.