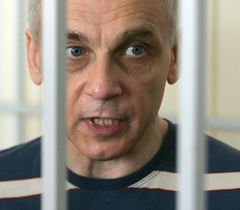 Former Acting Defence Minister in Yulia Tymoshenko’s government, Valery Ivashchenko is outraged that the Prosecutors have doctors’ assessments of his state of health that neither he nor his lawyers have been given.

Mr Ivashchenko was responding to the latest refusal by the Pechersky District Court in Kyiv to release him from custody under a signed undertaking not to abscond.

“Please note that neither I nor my defence lawyers have received the medical documents about my state of health, yet the Prosecutors have all of them”, he stated to the court.

He added that this is not the first time that the Prosecutors have received doctors’ assessments the following day after an examination while he was only given them later.

Valery Ivashchenko has been in detention for over a year. He is charged with having, in November 2009 while Acting Minister of Defence abused his position by signing a plan to sell the Feodosia Marine Engineering Works which was property of the Ministry of Defence.  Please see the Second Preliminary Report by the Danish Helsinki Committee on Human Rights, where Valery Ivashchenko’s case is one of those examined.